It is like a youth potion. After half an hour at the #GYC12 in Vienna I started to realize this feeling, which Henri Dunant meant with “Tutti Fratelli!” – writing about the women of Solferino. 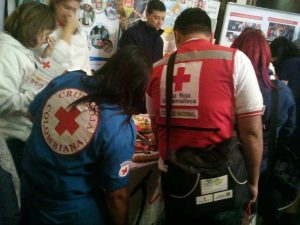 Dozens of young Red Cross Red Crescent Boys and Girls or better Men and Women were presenting their visions of practical humanity and presented their national youth programmes to the other participants from all over the world.

Yes, it smells like teen spirit – like nirvana sung in the 90ies – and I do feel 20 years younger in this crowd of humanity.

There are quite large differences in the needs of the most vulnerable in different countries. Therefore I could listen to a variety of youth programs, each of them introduced in the most passionate way possible. They sung, like the team of Africa or Asia, they played a TV-Show, like the team of the Americas and they distributed condoms, like the Europeans.

There are about 171 participants from 94 nations at this global event. Each of them is representing hundreds and thousands of others, who are the future of our Red Cross and Red Crescent movement all over the world. They are the Change-Agents for Humanity, like one of the participants told.

However they are also individuals here in Vienna. Some of them saw snow here the first time, did their first snowball-fight. At this beautiful ”winter wonderland”-location at the west end of Vienna, where the Red Cross/Red Crescent Global Youth Conference is being held.