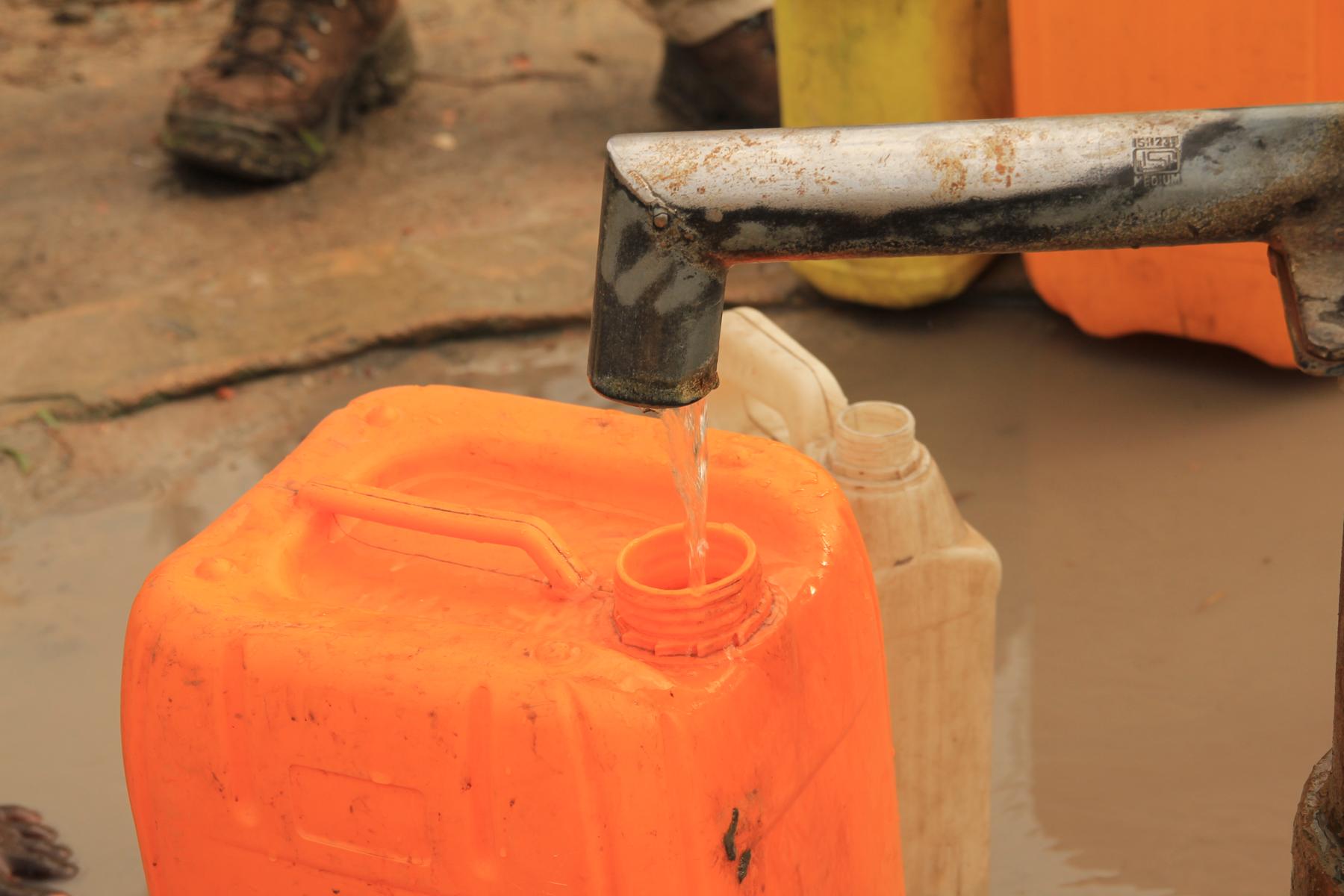 Sitting in the dust of the road, long metal pipes and other parts lay ready to be installed. Under the hot sun of Northern Bahr El Gazhal, a team of the South Sudan Red Cross (SSRC) volunteers are sweating but lively chatting along while dismantling a broken platform of a water site in Aweil Center county. Together with the local hand pump mechanics they managed to repair 30 of these water sites in the last months, many of them had to be done completely new to protect the water source. Each of these sites caters for approximately 500 users providing access to clean water to more than 15,000 people.

Dominic Garang Aleu, a teacher from profession, joined the SSRC in 2013. He had to flee the Bahr El Gazhals due to the war when he was a child and got in contact with the Red Cross for the first time in Kenya. Now, after he returned, he is engaged in leading the water site rehabilitation team of the SSRC Aweil branch and knows all too well the challenges his people face:“Sometimes no one felt responsible for a water site, now every point must have a water management committee in place to prevent breakdown by non-maintenance.” Still, he highlights the importance of combining these repairs with long hygiene promotion trainings to emphasize the value of health: “People started to clean up around the sites, fence their water points and collect money to be prepared for any repairs that might come”.

“Safe water”, “water treatment”, “water borne diseases” – marking the World Water Day 2015 many will think of drinking water and maybe the prevention of diseases by having safe water. But for people living without it, access to this a new water site means often additionally a wide range of other new opportunities: hygiene improvement, saving time when collecting water or making a small irrigated garden.

David Mitu, the Water and Sanitation coordinator in the SSRC Headquarters, lists just a few activities of his department: “While the longer term projects involve often repairing of existing water sources or drilling of new ones, in times of disasters like the cholera outbreak last year we for example go to demonstrate water purification techniques for households.” Supported by their partners from ICRC, IFRC and other Red Cross Societis they also have delivered the “medicine number one” – safe water – to people displaced by the ongoing crisis or affected by disease outbreaks.

In some areas of Aweil Center county there has never been a water site that provided clean water and so seven new sites were constructed, equipped with handpumps. One of this new site lies between the villages of Nyikualal, Mayomdit and Amanjam in Aweil Center county, normally not accessible in the rainy season.

Paskuala Duma, who has 4 grown up children also living nearby, is a neighbour who explains how this site changed their living conditions: “The people living around here used to go to the Chel river in the west. It took them around 3 hours to get water, now it takes maximum 30 minutes. In the rainy season people took the water from the puddles and little ponds that formed.” Paskuala was already aware of the hazards of contaminated water and used to boil drinking water, but admits that is a lengthy process and not many people treated the water although they knew about the dangers.

When they knew about the opportunity that the SSRC could drill a new hand pump equipped water site the three villages decided on a common spot, equally away from all centers. “Since there is no road to this place, residents from the area started to clear out the bush all the way to the main road so the heavy drilling truck could come here.”

The activities in Northern Bahr El Gazhal are part of a long term project of the SSRC together with the Austrian Red Cross which was financed by the European Union and the Austrian Development Agency, building up capacities of the SSRC staff and volunteers in the Water and Sanitation sector. In total, the South Sudan Red Cross has provided clean water for around 58,000 people just under this single project.

A special water yard has been established in the branch itself that runs on a solar pump. The volunteers made additional use out of it and constructed right away a vegetable garden irrigated through the new water yard. John Mou Akok presents the functioning of the garden. He also is the supervisor of the hygiene promotion facilitators of the SSRC Aweil branch. They visit communities that were interested to improve their hygiene standards every week and work with them. So John Mou experienced on various level, what the availability of clean water means to the people in the area and the importance of a combined approach. While he shows around people from the neighbourhood are lining up at the new water distribution point fed by the water from the solar water yard to fill their jerry cans- carrying home 20 litres of healthier living.