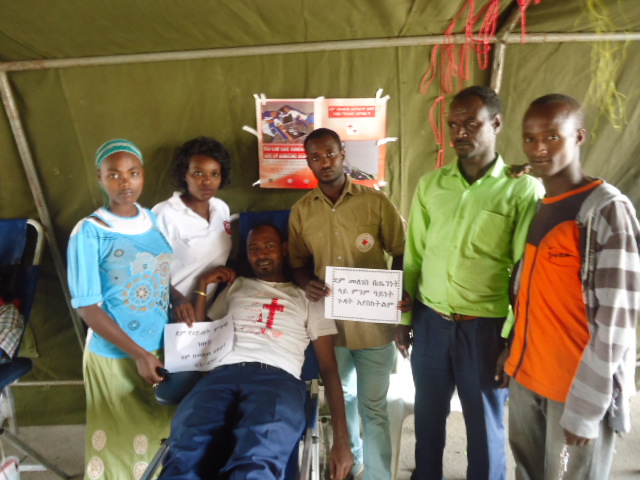 Austrian Red Cross (Aut RC)  is supporting the West Arsi Branch of the Ethiopian Red Cross Society (ERCS) since 2008 in developing its capacity. Furthermore Aut RC is supporting WatSan projects in Kofele and lately also in Arsi Negele Woreda benefitting more than 20.000 people in 3 communities. West Arsi Branch is developing dynamically under the leadership of its Branch Head Ato Buseri.

Over the last couple of years RC membership has increased by more than 100.000 members in West Arsi Zone. Income generation is improving with the construction of a 5 story multipurpose building in the centre of Shashemene town progressing well. Once completed, rental income from the property will ensure sustainable funding for core activities of the Branch, including Ambulance Service, Essential Drugs Programme, First Aid Training/Provision and Youth and Volunteer Development.

ERCS West Arsi Branch has recently opened a new Woreda Office in Arsi Negele some 60 km north of Shashemene. Ato Kadi, managing ERCS activities in Arsi Negele, has managed in the course of the last 2 years to set up a Woreda Office from scratch under the leadership of ERCS Shashemene Branch, supported by the local Woreda Authorities and RC Partners.

“Without the support of our Partners, we would not have managed to set up the new office in such short time. During the last year we have been able to set up the office, providing much needed ambulance service for the community, training more than 100 volunteers in first aid and recruiting more than 7.000 members for the RC.” Says Ato Kadi, who is also in charge for implementing the ADA/Aut RC/Swiss RC funded Bishangari Water and Sanitation Project, aiming to provide 6 communities with more than 9.000 inhabitants with access to safe water and supporting their awareness and capacity to improve the general hygiene and health situation.

“The youth in Arsi Negele as well as the local authorities are very happy to have a Red Cross Office finally here and are committed to support us in providing more services and support to vulnerable people in the area” says Ato Buseri, who is rightfully proud of the achievements of his team. Aut RC is proud to be part of this success story and committed to continue the fruitful partnership with West Arsi Branch which is regarded a role model for Aut RC/ERCS Long Term Cooperation.